You Are the Boss of Me 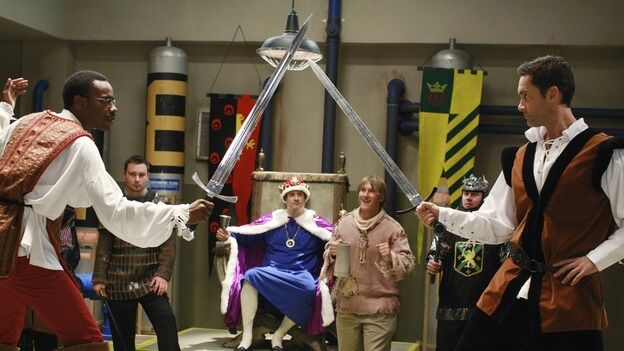 "You Are the Boss of Me" is the eighth episode of Better Off Ted. It originally aired June 23, 2009.

Weird boss/employee friendships are brewing at Veridian but, uh, who's gonna teach Veronica that sharing is caring?

At the end of a presentation for another far-fetched Veridian invention, Veronica remembers she has no way of getting home because her driver died and she hasn't hired a replacement yet. Linda offers to give her a lift, but, unfamiliar with acts of kindness, Veronica tells her she can't pay her what her old driver was earning. Linda explains that she doesn't have to pay, so Veronica accepts with a painful, tongue twisted "Thank you."

Meanwhile, Ted invites Phil and Lem out for a beer since his ex-wife Stacy has Rose for a week and he has gobs of free time. Wouldn't baking a cake be more entertaining than hanging with these two lab geeks? Lem objects, fearing that hanging with the boss is a bad idea, but Phil argues that Ted could bring them some "street crud." Yeah, he meant street "cred" (as in credibility) and Lem corrects him, to which Phil responds, "Oooh ... now that finally makes sense."

Back at Veronica's place, Linda is confused to learn that not only did Veronica's driver pass away this week, but so did her grandmother. Veronica clears things up, explaining that her grandmother and chauffeur are one and the same. What? Shouldn't she be driving Miss Daisy, not the other way around? Anyhoo, this leads Veronica and Linda to bond over lots of wine, which they have to pour themselves since Veronica's housekeeper died this week as well. Any guesses as to whom the housekeeper must've been?

For their big night out, Phil and Lem introduce Ted to the sub-basement Medieval Fight Club, where they will be spending their little get-together. Phil describes the scene as "coooool." More like Renaissance Faire meets computer geeks to us!

Veronica and Linda continue bonding, only a bit more tipsy and with Veronica yapping away about all her problems. Linda is pretty trashed when she asks how Veronica can be "sotally tober" when she herself is completely "fit shaced." Veronica explains that she's always been that way and that her body doesn't process alcohol like that. She takes another sip of wine and … THUMP! She passes out, face down on the kitchen table.

The next day, Veronica feels as though a heavy weight has been lifted off her chest after sharing so much with Linda. So, Veronica continues to use Linda as a sounding board – something Linda grows extremely tired of. Veronica confides in Linda about all sorts of past evil doings, like feeding her sister while she was asleep so that she wouldn't be skinnier than her, and the time she accused Omar Sharif of being a terrorist so that she could take his first class seat on a plane.

But when the confessions continue to come at all hours of the day and the wee hours of night, Linda can't take anymore and tells Veronica she wants a friendship break. Veronica, less than pleased with the idea, agrees to the break but immediately starts snubbing Linda. Soon after, Linda finds her cubicle space has been reduced to the size of a "hobbit hole."

Meanwhile, Medieval Fight Club finds a new gladiator in Ted, who has been busy wiping the basement floor with all those who have dared to challenge him. At first, this brings great honor to Phil and Lem, but when they face him in battle and lose, they are stripped of their current rankings and reduced to lowly court jesters.

In Lem's own words, "Bosses and employees just shouldn't hang out. It's like a ventriloquist trying to be friends with his dummy. At the end of the day you know who's sleeping in the suitcase." Enough said!