Win Some, Dose Some 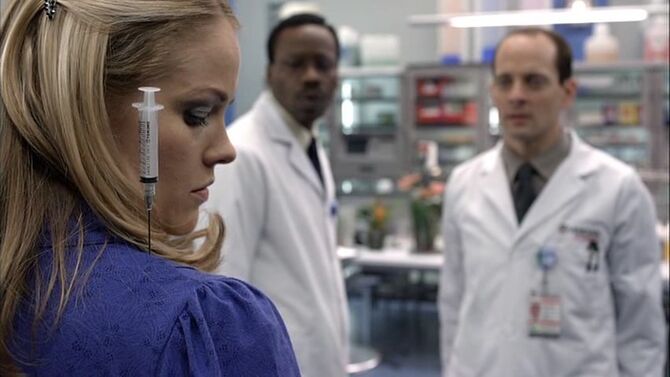 "Win Some, Dose Some" is the fifth episode of Better Off Ted. It originally aired April 15, 2009.

Our favorite Veridian employees get a little too wrapped up (literally) in competing with each other, to hilarious effect!

Ted lets us in on a little secret about Veridian Dynamics. The company is so dedicated to being the best that everybody under its employ is very, very competitive—from getting to a water fountain first to Lem and Phil trying to see who can throw the most syringes up to the ceiling without them falling down.

Linda comes to the lab to get specs for the solar-powered ovens Phil and Lem are working on for the military, when one of the needles falls and sticks her in the shoulder. Yee-owch! Lem and Phil quickly put a bandage on her "lady shoulder" (Phil's words, not ours!) only to realize after she leaves that the bandage was actually an energy patch designed to look like a bandage. Uh, oh!

As expected, Linda all but starts bouncing off the walls. Lem and Phil tackle her and remove the energy patch, but now Linda goes from happy to sad to incredibly mouthy within seconds. Only after she makes a fool out of herself in front of Veronica and Ted do Phil and Lem admit to their accidental dosing of her. And to think, it started with a game of innocent hypodermic needle tossing!

Per Ted's orders, Phil and Lem watch Linda for 24 hours until the effects of the energy patch wear off. Once she's back to normal, she gets a small bit of revenge by tricking Lem and Phil into thinking that a side effect of the energy patch was her sprouting feathers. Hey, that's fowl!

Meanwhile, Ted is helping his daughter Rose win a school wrapping-paper-selling contest so that they can score a trip to Disneyland. The only problem is that a girl named Cynthia in Rose's class is beating her. And, we find out why—Cynthia's in a wheelchair.

Ted, much more competitive than he will admit, enlists Veronica's help to win. And Veronica, sensing an opportunity to boost military funding, agrees, as long as Ted has dinner with an army general who has a very overt man-crush on Ted. Soon, Rose is far ahead of any other competition. But since everyone else in Rose's class is letting the wheelchair-bound girl win, Rose gets the stink eye from all her classmates at school.

The next day Ted tells Veronica they need to stop selling, but she refuses. So now the two are competing over not who can sell the most wrapping paper for Rose, but whether Ted can sabotage Rose's chance at winning and whether Veronica can sell enough for Rose to win. Um, Ted is the best dad ever?

Ted returns at least half of the money from wrapping paper he sold to Veridian employees by running through a laundry list of fake side effects that the wrapping paper causes. Veronica is actually selling wrapping futures, putting Rose far ahead of everyone in her class.

In the end, Ted has to have dinner with the general. But he ends up charming the military man into spending millions of dollars on wrapping paper. Therefore, Rose can happily lose the gift wrap paper-selling contest. Ted gloats about finding a way to beat Veronica, who retorts by firing back that that he still had to have dinner with the touchy-feely army general.

We're not sure who actually won this not-so-friendly competition, but it was sure fun to watch!