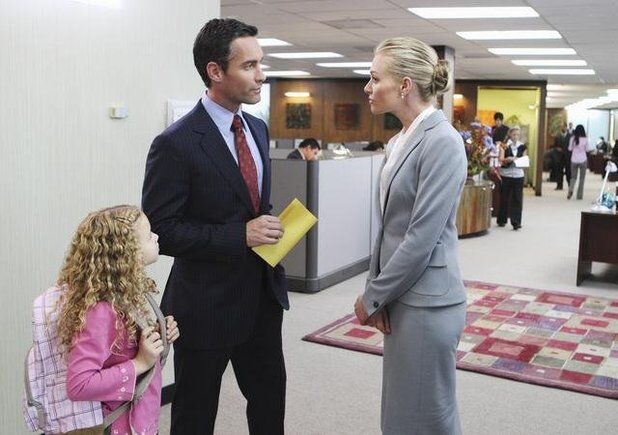 "Through Rose-colored HAZMAT Suits" is the third episode of Better Off Ted. It originally aired April 1, 2009.

A daughter's day at the office turns a bit scary when a fire alarm—and some tense emotions between Ted and Linda—flare up.

Ted reintroduces us to his adorable daughter Rose, whom he's now raising after wife ran off to work in Africa. He's forced to bring her to work for the day as Rose's nanny has been out sick. Rose, however thinks the nanny is pulling a fast one.

The Veridian Daycare supervisor is happy to have Rose, especially when she hears the girl likes to paint. Of course, since this is Veridian we're talking about, the painting will be of the white lines in the company's parking lot. Wow—talk about expanding the minds of children!

Ted wisely opts out of Veridian's draconian Daycare and takes Rose with him to his office. Veronica makes one of her typically-immoral requests, but Ted deflects it by introducing Rose to her. Veronica does about as well with Ted's daughter as she does with, well, any other human being.

When Ted's daughter joins him in meetings, Phil and Lem are forced to present the plans for a deadly weapon they're testing in a kid-friendly way. For example, bunny = bomb. Kill = cuddle. Get the point?

After the meeting, Rose innocently mistakes Lem to be Phil's boss, which of course causes an argument between the two of them. This is interrupted by a lab alarm that forces all of the employees in the vicinity put on Hazmat suits, which seems to be happening more and more frequently. We're less than shocked that this does nothing to stop Lem and Phil from bickering over Lem's bossiness.

Later, Ted thanks Linda for watching Rose. As she leaves to meet with an ex-boyfriend, Ted can't help but get a little jealous. But Linda isn't having it, reminding him that it was he who blew her off.

Ted asks Veronica to watch Rose when he goes down to fix the lab situation. Uh, you've met Veronica before, right, Ted? When Rose's presence keeps a higher-up from barking at Veronica over a few lab techs' screw ups, Veronica is more than happy to exploit Ted's daughter shamelessly—like by using her to fire underlings.

Ted and Linda find themselves caught in the same room as another building alarm goes off. Linda panics as they put on their rose-colored Hazmat suits, but Ted is calm and reassuring. Faced with the possibility that this alarm is not false, Ted and Linda share a kiss and then start full-on making out—which we agree might be kind of hot if not for the helmets they happen to be wearing.

The alarm turns out to be a false one, having been caused by one of the lab techs that Veronica had Rose fire. Ted takes that as his cue to pick his daughter up before Veronica turns her into a "mini-me," complete with the power-bun hairstyle.

The next day, Ted decides to make a move on Linda. But he gets cold feet after realizing during a conversation with her that she might run away just like Rose's mother did. So he tells Linda that nothing can happen. Her response? Throwing a huge green gob of prototype diet food at his back when he walks away.

As for Veronica, she's infatuated by Ted's daughter Rose, and we leave her as she scours the Veridian Daycare to find another one just like her.