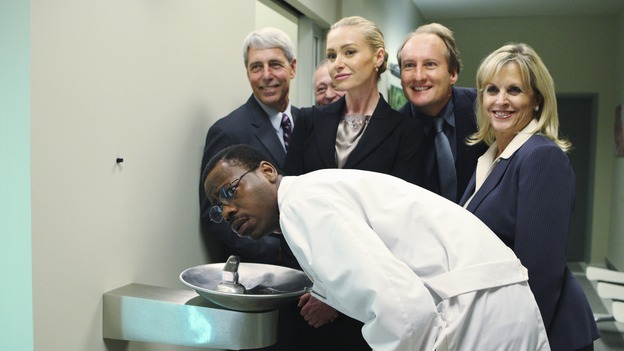 "Racial Sensitivity" is the fourth episode of Better Off Ted. It originally aired April 8, 2009.

As a racial conflict throws a wrench in productivity at Veridian, we discover that the emotional tie between Ted and Linda isn't exactly as simple as, er, black and white.

Ted laments his decision to avoid any sort of workplace romance shenanigans with Linda, despite their prior kiss. Granted, they kissed while wearing Hazmat helmets, so we're not even sure if that counts as a real smooch.

Regardless, Ted bumps into Linda at the elevator, and after an awkward hello, asks her again if everything is okay. It turns out to be bad timing for him, though, as Linda is standing there with her boyfriend, Don. Embarrassed, our hapless hero bolts out of the elevator before it even leaves the floor. Subtlety, thy name is not Ted.

Meanwhile, Lem and Phil have their usual morning quarrel, this time over coffee and microscopic organisms. (Trust us, folks—it's hardly as sexy as it sounds.) When Phil leaves to get a cup of joe, everything in the lab suddenly shuts off. Lem is confounded by this, even more so when everything springs back to life upon Phil's return.

Ted reports this problem to Veronica and finds out that Veridian installed new motion sensors in the building, which detect employees based on the light reflecting off their skin. In short, they can't detect black people. Someone get us Rev. Al Sharpton on the horn, stat!

Meanwhile, Linda, being a model of maturity, throws Don's accomplishments in Ted's face in order to make him jealous. She then unwisely suggests that Don and Ted go on a racquetball "man date," because Don is so good at it he'll probably beat Ted. Needless to say, the two of them don't exactly hit it off.

Lem and the other black employees furiously charge into Veronica's office, and she presents them with a modern, insightful solution— separate water fountains for black employees!

Since we notice that idea goes over about as well as a stripper at a church revival, Veridian then decides to hire minimum wage white employees to follow around the black employees so the motion detectors will work wherever they go. Lem gets a particularly dumb "shadow," who tries to mimic his every move.

Linda is less than thrilled that Ted and Don's dude date was a disaster, and gives a stunned Ted attitude about it. But Veronica sums it up as Linda being upset that Ted isn't hung up on Linda anymore. Or maybe he never was?

In the meantime, Veridian's legal team states the company must hire an equal amount of black people to the extra white people they've hired. Then hire more white people to counter than, and so on and so on. Is your head spinning as much as ours at this point?

Speaking in a language that the Veridian upper-crust understands—and, if you guessed money, then you win the big prize—Veronica, Ted and Lem show how much cash it'd take to keep hiring more people to fix their gaffe. With that being said, Veridian then restores the old motion sensor system that detects everyone. In the end, Ted decides to lies to Linda about hating Don in order to get back into her good graces. It seems to us that the two reluctant lovebirds are back on track.