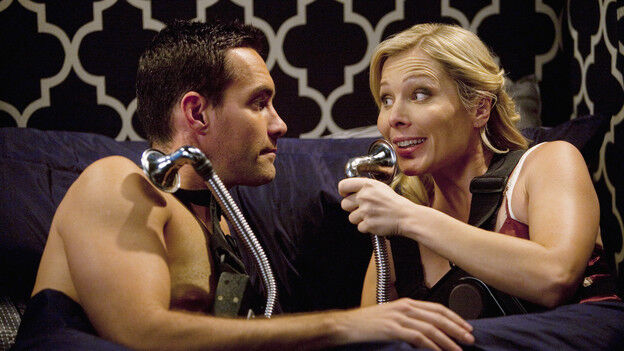 "Lust in Translation" is the twenty third episode of Better Off Ted. It will air January 19, 2010.

Veridian is developing a multi-language translator device. When you speak one language into a mouthpiece, the machine’s voice spits out a translation of everything you say. The CEO of the German company interested in the device is a beautiful woman named Greta, who is not exactly fluent in English. Sounds like the multi-translator device may come in handy.

Unfortunately, the translator’s computer-generated voice sounds like it’s coming from a 90-foot robot. While Phil and Lem take a few days to fix the voice, Greta wants Ted to take her out on the town. He’s more than happy to do so; even though Veronica fears Ted may blow the deal if he gets too friendly with the Fraulein. Too late. Veronica discovers that Ted is “Jack-hammering Gretel like she’s Berlin Wall.” How romantic.

Linda has commandeered an empty room to play Linda-Bagel. What’s Linda-Bagel, you ask? It’s a game where Linda bounces bagels off a wall and into an open air vent. It’s pretty challenging, which is why Veronica wants to play. She’d probably be a natural at Veronica-Bagel, but her skills at Linda-Bagel leave a lot to be desired. So she asks Phil and Lem to make her some super bagels that will allow her to beat Linda at her own game.

Phil and Lem fear they have become evil scientists. Most of their inventions, such as the man-eating ficus, seem to have an element of wickedness to them. It doesn’t help that Phil breaks into a maniacal laugh whenever he’s faced with an unpleasant truth. It’s why he got kicked out of that Al Gore movie.

The updated version of the multi-language translator is delivered to Greta’s hotel room. She wants to use it to engage in some pillow talk with Ted. Now they can say all those sexy, steamy things that otherwise would have been lost in translation. Unfortunately, the new voice on the device is Phil’s. Greta likes the voice. She says, “It’s warm and friendly and almost gender-neutral.” But it’s a total turnoff to Ted.

The Phil-voice prompts Ted to find ways to “not” talk to Greta. This leads her to believe that their relationship is all about sex. That’s just doesn’t work for her. She kills the partnership with Veridian and bums out Ted -- not because the business deal fell through, but because he genuinely likes Greta. He asks her if they can talk things over in his office, even if it’s in Phil-voice-mode. Greta agrees.

Back in the lab, the guys are still bummed about the idea that they may be evil scientists. They stare at the batch of super bagels the created for Veronica. Lem says, “Using them for wickedness would be like beating a unicorn to death with a bag of rainbows.” Our favorite lab boys decide to take a stand. They will tell Veronica that these bagels must be used only for good.

But Veronica has already embarked on another round of Linda-Bagel without any outside help. This time, however, she’s banking bagels into the vent with pinpoint accuracy. Linda is losing. But it could be because she’s distracted. See, the vent they are using leads to Ted’s office. They can hear Greta’s bawdy talk as Ted pleasures her. Of course, Greta is using the multi-language translator, so it sounds like Ted is seducing Phil. That would be enough to throw off anyone’s game.

Veronica throws one last bagel to win the match. She wants it as a keepsake for her trophy case, so she crawls into the vent to retrieve that winning piece of leavened dough. But those vents aren’t very sturdy. Veronica crashes through the ceiling to the floor of a hallway where Phil and Lem stand. They were on their way to tell her that she can NOT use their bagels for evil. Veronica’s response is a simple “I won.”

Veridian wins, too. Ted’s reconciliation with Greta saved the deal with the Germans. As for the future of Linda-Bagel, please sign our petition to make it an Olympic event in 2012.