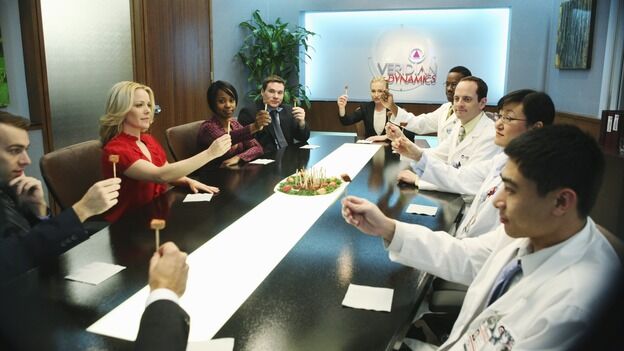 "Heroes" is the second episode of Better Off Ted. It originally aired March 25, 2009.

Veronica takes a keen interest in Phil when he shows side effects from being frozen, but will she or his newfound irritating ego be his downfall?

As Ted tells us how exciting it is to be the head of research, Veronica interrupts him by practicing the art of small talk. But, she ain't no verbal Picasso. She tires instantly, ordering Ted to create a brand new food product that will wow the shareholders.

In an R & D staff meeting, Lem and Phil try to explain their 'beef without cow' experiment. However, in the middle of their usual annoying bickering, Phil stares into space and shrieks incoherently. Ted deduces that this is a side-effect of Phil having been cryogenically frozen. Smart guy, that Ted.

Veronica calls Ted in and informs him that Legal is uncomfortable with using Phil in any capacity until they're sure that he won't sue for their 'allegedly' trying to freeze him. Umm, ya kinda did freeze him, Veronica!

But Ted fights for Phil, knowing that he is needed if Veronica wants her cow-less beef project to go forward. Ted tries explaining to Veronica that it would be the right thing to do to honor Phil's work commitment. But, since she is a smidgen ... detached, shall we say, Ted states that Phil won't sue as long as they treat him respectfully.

So, they 'honor' Phil with a phony Trailblazer of the Year award, given to him in the executive dining room, a place rarely seen by Veridian's underlings. Lem can't take Phil's growing arrogance, but they still have cow-less work to do. When a taste-tester describes the lab beef as tasting like despair, Ted asks Lem and Phil to fix it. Except, Lem asks to not work with Phil anymore.

Ted tells Veronica, who is almost gleeful at the prospect of deflating Phil's ego and taking away his Trailblazer of the Year Award, which she knows is a fake but wants it anyway. However, instead of going that route, she concocts another evil plan.

As Phil laughs it up with the Veridian execs, Veronica fluffs his ego and asks for an autograph. So high on the fumes of his own awesomeness, Phil is tricked into signing a waiver that prevents him from suing the company for his freezing. Kinda stupid for a supposed genius!

Back in the lab, Lem is stumped on how to fix the taste issue with the cow-less meat. Phil returns to the lab, humbled. Almost immediately, he and Lem start bickering to the point that Ted dissolves their partnership. Phil rants over Lem's new lab partners and their lack of knowledge of microfabrication via something scientastic, but then Ted reminds Phil about how Lem must have felt abandoned on those few days that Phil was on ice.

Realizing the error of his ways, Phil runs to find Lem and they bond in their geeky lab tech way. With a renewed sense of purpose, the two get back to work on making the beef 'taste like something some a drunk teenager would tip over.' Ted's words, not ours.

Lem and Phil eventually uncover the solution and create amazingly good cow-less meat. Too bad that at $10,000 a pound, selling this mouthwatering wonder to the masses is still a long way off for Veridian!