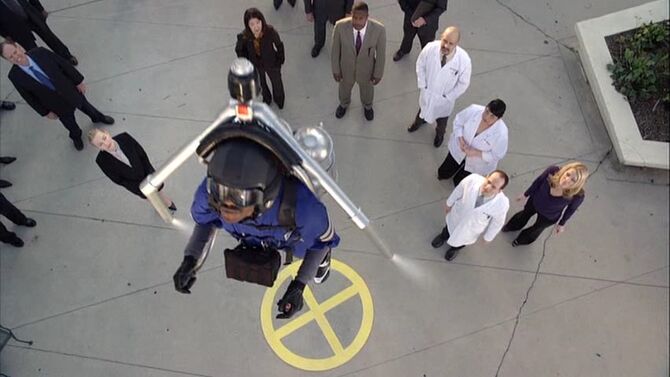 Ted is accidentally erased from Veridian's system entirely and the gang resorts to desperate measures to get him his job back.

When Ted notices that his new employee badge has his last name misspelled as 'Chips' instead of 'Crisp,' he goes to HR to get it fixed. However, instead of fixing it, they accidentally delete him from Veridian's database. This could not have happened at a worse time, since he needs to witness a test for Phil and Lem's new rocket jet pack in two days.

Veronica reassures Ted that it's just a computer glitch, but he wonders why Veridian can't just add him back into the system. Apparently, the geniuses at Veridian mandated that you have to have a 459 code in order to be added back into the system, i.e. one has to be a new hire. So, Ted re-applies for his old job.

As expected, Lem, Phil and the other scientists devolve into bickering five-year-olds without Ted. Linda is quickly overwhelmed by their arguing and full frontal nerdity. She goes to Ted for help, who advises her to make sure her tone means more than her words. And to carry around caramels if that doesn't work.

Veronica is annoyed at Ted for reapplying for his job and starts the interview process out of formality. But Ted finds out that the company could restore him to the database by rebooting its mainframe. Veronica shoots that idea down, saying that Veridian would never do such a thing for one employee when there is cash to be lost. So Ted, out of utter frustration, quits.

After hearing about Ted's abrupt departure, the lab crew freaks out. Don't worry, Linda has a plan … and caramels. Linda, Phil, Lem and the other lab scientists meet at Ted's house and tell him they can reboot the mainframe.

Phase 1. Dr. Bhamba poses as a janitor and disables the security cameras.

Phase 2. Paula, a lab technician, tapes off doorways so that Lem and Phil can bring in the computer virus that will make the Veridian database reboot.

Phase 3. Linda uses her feminine wiles to distract a guard so that Ted can steal his security badge and sneak in.

One minor roadblock — Veridian has trackers on all new ID/security badges, so security catches them before they can even get into the Veridian mainframe room. Foiled!

Veronica chews out Ted, Linda and the lab crew for half an hour, then demands their ID badges so she can lower their security clearance as punishment.

As Lem prepares to test the jet pack himself, Veronica gives him a 'parachute' stuffed in a knapsack. However, the knapsack is stuffed full of all the ID badges Veronica took, which includes many more than just Ted and the gang's.

The Veridian mainframe, detecting 75 employees are stuffed into one knapsack, freaks out and reboots. Wait a minute. Was Veronica in on this devious plan the whole time?

Turns out that Veronica's boss wanted to replace Ted with a much cheaper candidate right out of business school. But Veronica wasn't going to let that happen, and when she wants something, she usually gets it. So, she actually did something nice for Ted? We can't believe it. Maybe she does have a heart in there somewhere.