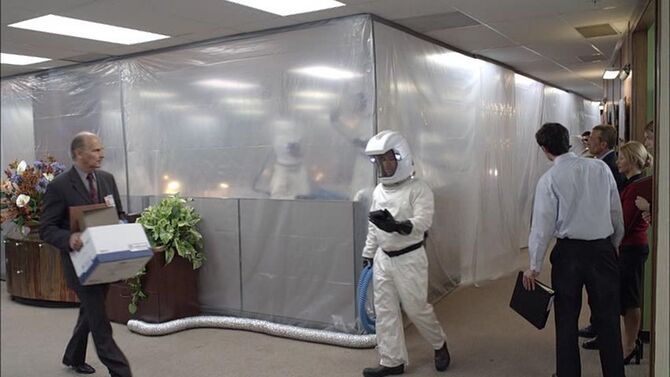 "Bioshuffle" is the ninth episode of Better Off Ted. It originally aired June 30, 2009.

A little robot/human mishap leads to a shake-up in the office when Dr. Bhamba's biocomputer springs a dangerous leak all over Linda's desk. We start off watching Lem and Phil as they show Ted and Linda their newest invention, a hypersonic sound emitter—or, in Phil's words, the "voice of God." Ted gives that nickname a big fat no. HA! Anyway, Linda snarkily describes how the machine helps Veridian's victims, er, customers. (Given what we've seen, how can you disagree?) As an example of its power, Lem uses it on an unsuspecting coworker to make him stop using the copy machine all the time.

Later, Linda is working at her desk when acid starts to drip from the ceiling. After calling the corporate HAZMAT team, Dr. Bhamba determines the toxic ooze is originating from their bio-computer a few floors up. So until the leak is plugged, the workers are told to share cubicles. For Ted, Linda will be sharing his office. For Phil and Lem, that means all the lab techs from the bio computer floor are reassigned to their lab space—including a cute little lady named Lucy. Phil, who seems to be quite the matchmaker this episode, pushes Lem to not moon over Lucy from afar but to talk to her. Lem does just that, with surprisingly good results— Lucy agrees to go on a date!

At first Ted is more than happy with Linda being in his stared space. But he soon learns what annoying habits his beautiful coworker has, like singing out loud, or thinking her goldfish are people. By the end of the day, Ted flees his own office just to get some work done. We can't really blame him.

Ted finds refuge in Veronica's office. However, as the stress of the persistent acid leak and pressure from her higher-ups get to her, Veronica finds more and more violent ways to relieve her tension. After she starts firing a loaded gun at a helpless couch pillow, Ted realizes this leak needs to be fixed so he can get his work life back in order.

At Ted's insistence, Phil concocts a polymer to patch things up. Ted then confronts Linda over her work habits, calling them unprofessional and grating. We think that's putting it mildly. The two of them decide that from here on out, there's to be no more flirting or casual talk. Ted is just Linda's boss and she is just his subordinate. Well, that kinda sucks, no?

Lem and Lucy had a great first date the night before— that is, until Lucy's perfume made Lem sneeze, and she accidentally headbutted him into unconsciousness. They try to kiss again in the office, but Brody barges in. We wanna choke this guy! Lucy sees Brody for the jock jerk that he is, but Lem, jealous over him constantly hitting on "his" girl, tries to use the hypersonic machine on him. In a comical moment, Lucy gets in the way and ends up vomiting all over the lab floor. Yuck! So much for romance.

Before Lem can right his wrong, Ted drags him upstairs with Phil to fix the bio computer. Phil thankfully figures out the problem, and everyone finally moves back to their own office spaces.

Elsewhere, Ted and Linda, now back in their respective work areas, are only speaking on professional terms. But that doesn't stop Ted from taking a sneak peek at her behind when she turns around—where he finds the Sharpie-written message 'If you are reading this then you are not being professional." Ha! There may be hope for these two yet.